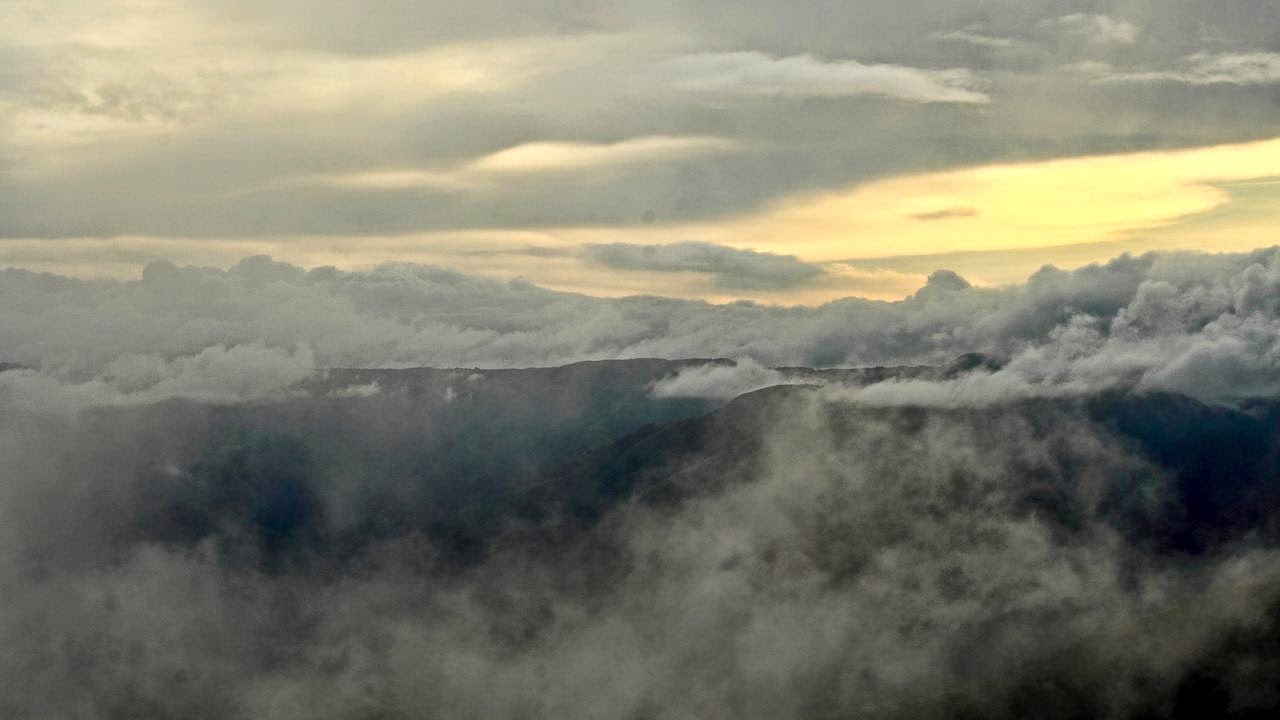 The wettest place on Earth

In India’s northeast, near the border with Bangladesh, the state of Meghalaya is full of lush green mountains and thick tropical forests that receive copious amounts of rainfall every year – the village of Mawsynram, for example, receives an average of 11,873mm of rain annually, earning it the title of the wettest place on Earth. But while the rains bring life to so much of the state, they have long presented a challenge to the indigenous Khasi people, who live deep inside Meghalaya’s jungles. During the June to September monsoon season, the otherwise gentle waterways that flow through the state’s deep valleys become strong, rain-fed torrents – impossible to cross by foot. (Neelima Vallangi)﻿ 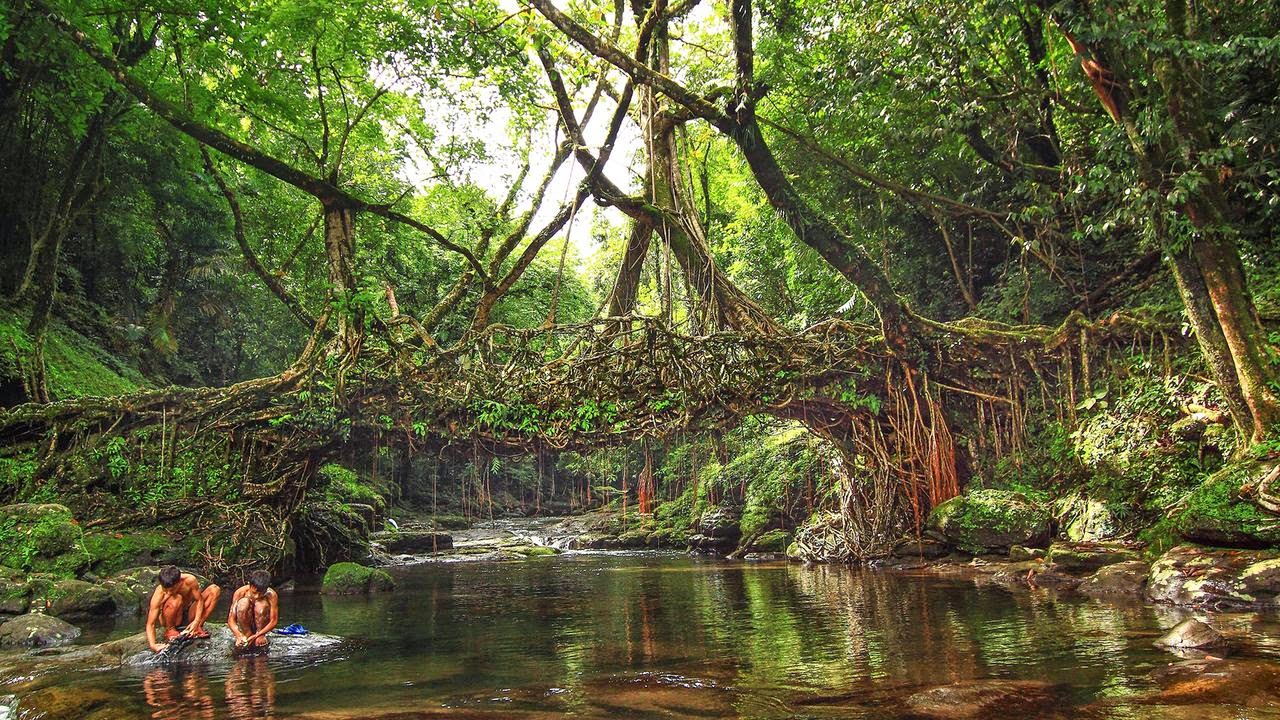 ﻿
About 180 years ago, Khasi elders devised a different solution. Rubber tree roots were guided in hollow canes of Areca nut palm to meet halfway across the stream. The roots were tended to and patiently nurtured for years until they slowly reached the opposite bank, forming the skeleton that eventually grew into a bridge capable of carrying a human’s weight. (Neelima Vallangi) 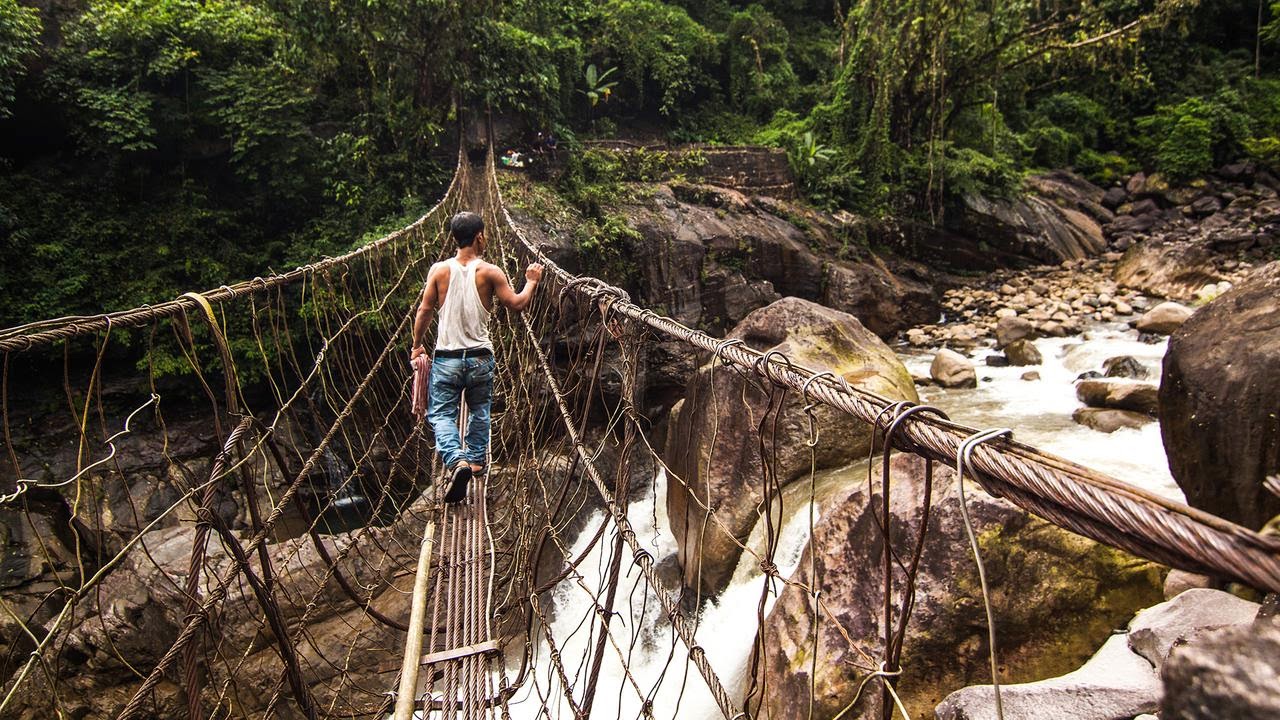 A slow trudge toward modernity

A local man crosses a modern steel rope bridge on his way to Nongriat from the village of Tyrna where the road ends and the two-hour, 5km hike to Nongriat begins. This steel bridge is one of three that created a shorter access route to Nongriat. Previously, travellers would follow a jungle trail from Cherrapunji to Nongriat, passing the Umshiang and Mawsaw root bridges along the way. Now, the old path lies mostly abandoned, pushing the root bridges even further to the fringe. (Neelima Vallangi) 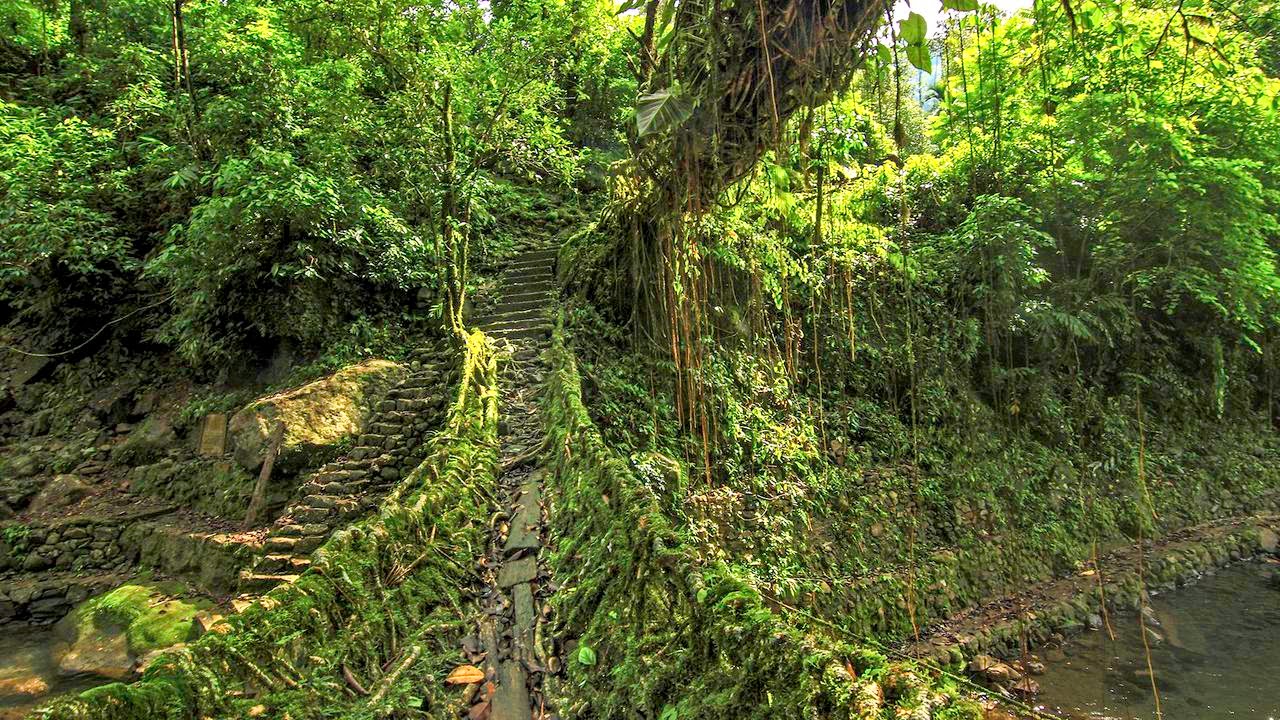 A bridge made from trees

It can take 15 to 20 years for the surreal, strong web of tangled root bridges to connect the two banks. Unlike traditional constructions, Meghalaya’s root bridges only grow stronger with time, never requiring major maintenance or rebuilding; the strongest root bridges are more than 100 years old. In the past 25 years, however, the practice of building these living bridges has been dying out. Rather than spend years creating living paths, builders today use steel rope and modern construction methods to bridge Meghalaya’s streams and rivers. (Neelima Vallangi) 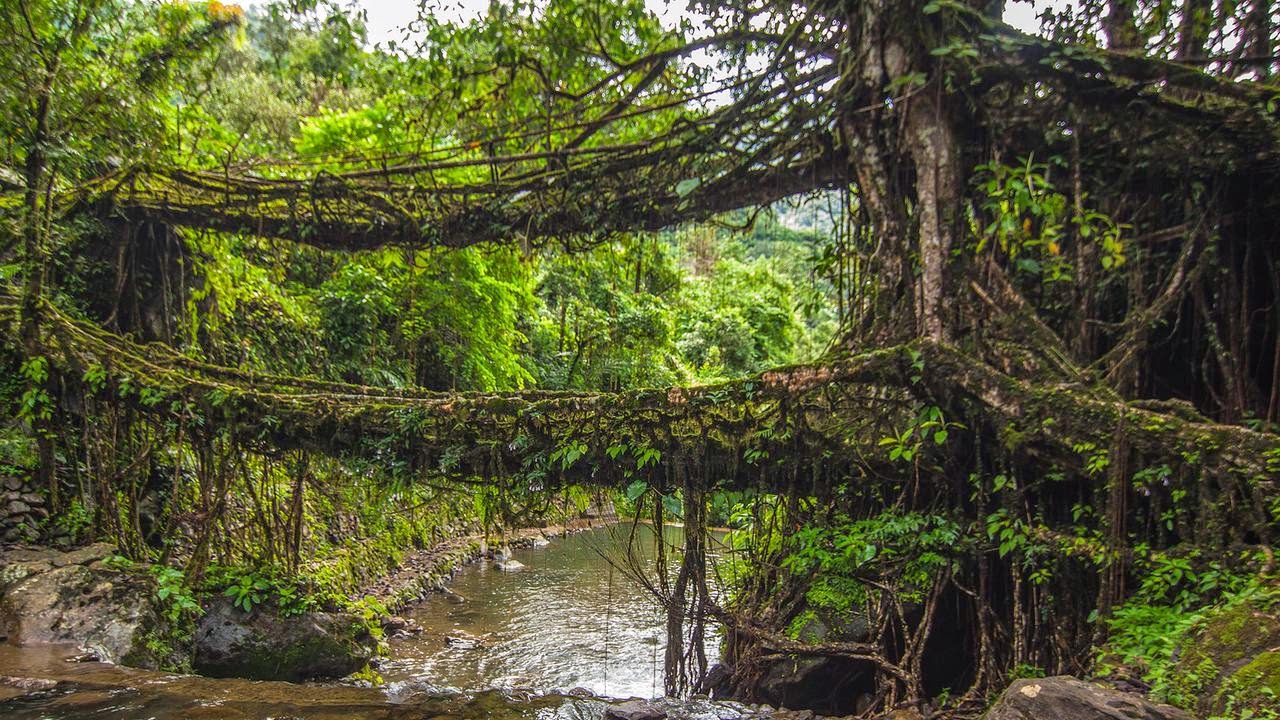 There are many living root bridges scattered across the dense valleys of Meghalaya’s Khasi Hills region, but the most spectacular and arguably the most famous is the Umshiang double-decker bridge, which is more than 180 years old. It is found just outside Nongriat, a small village that’s reachable only by foot, about 10km south of the town of Cherrapunji. The bridge’s two levels span the Umshiang River, and local villagers are adding a third level, hoping it will further attract tourists. (Neelima Vallangi) 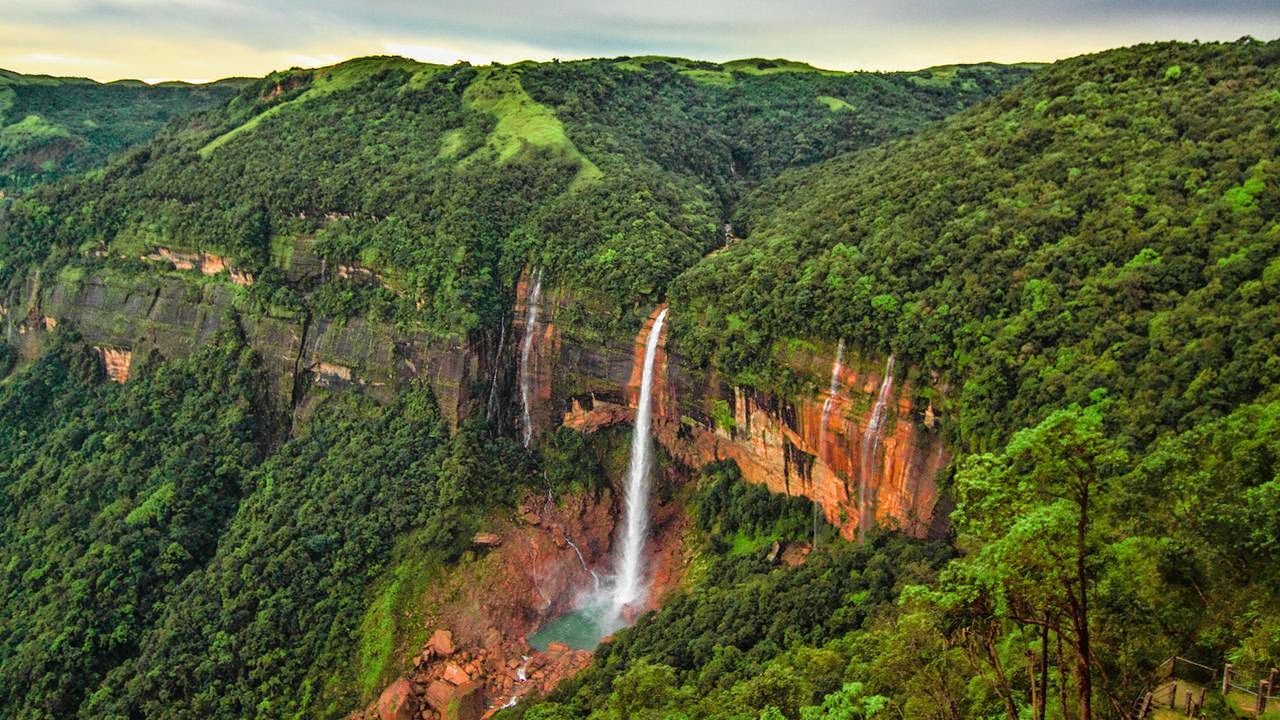 Waterfalls that spring to life

﻿
The mountains of Meghalaya are the first to obstruct the moisture-laden monsoon winds blowing north from the Bay of Bengal and across the plains of Bangladesh. The winds, channelled through deep valleys, gain altitude rapidly when they rise up against the mountain wall, which in turn causes heavy condensation and rainfall. These rains feed the raging rivers and create new waterfalls that tumble down the mountainside. In the past, Khasi the tribe would build bamboo bridges across the powerful streams. But the structures couldn’t bear the brunt of the heavy monsoons. They would rot and break, leaving villagers stranded. (Neelima Vallangi) 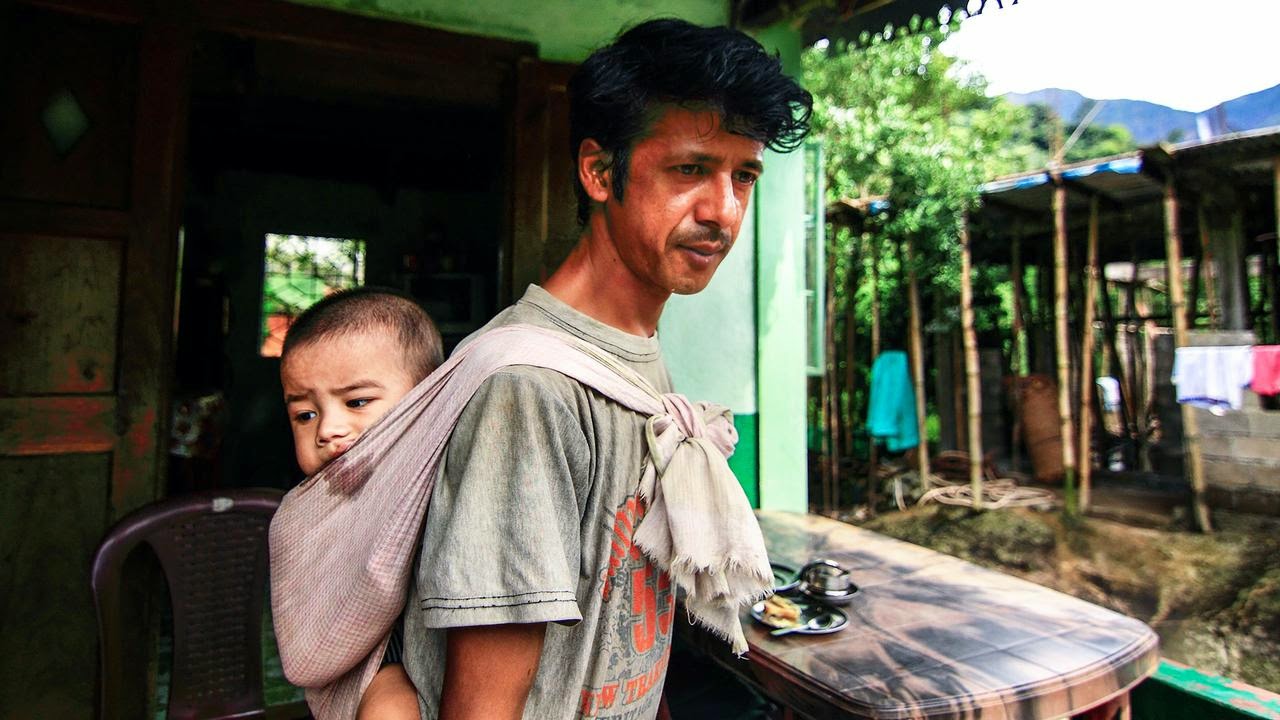 Khasis follow a matrilineal culture, where the husband moves to the wife’s village after marriage and children take on the mother’s surname. Biron Nongbri, a schoolteacher from a nearby town, moved to Nongriat after he was married. His wife’s grandfather helped build the Umshiang bridge. (Neelima Vallangi)
Posted by Lui Jinghui at 3:12 AM

Email ThisBlogThis!Share to TwitterShare to FacebookShare to Pinterest
Labels: India`s